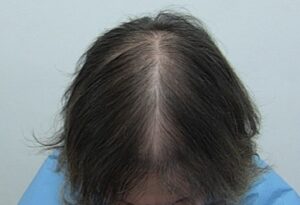 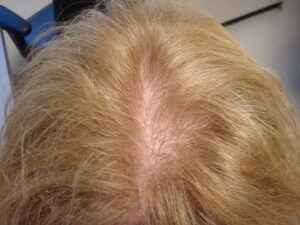 See FAQs at the bottom of the page.

Female pattern hair loss (FPHL) occurs in approximately 50% of women by the age of 50 years old. Although it may initially present with increased shedding, over time the hair loss is characterized primarily by a decrease in hair density over the top of the scalp. Affected women note a decrease in the size of their ponytail or being able to see their scalp after fixing their hair, something they was not a problem before. The hair may also feel finer than previously. This is a problem that can begin at any time after puberty although there are two main times of onset for FPHL—teens to 20s (early onset) or in the 40-50 yo age range (late onset). It must be emphasized that the term FPHL refers to the clinical presentation of the hair loss and not the cause of the hair loss: we still do not completely understand the etiology of this condition although much research is being done in this arena. What we do know is that hairs in the affected ares of the scalp in FPHL, like that in male pattern hair loss (MPHL), are finer and have a much shorter growth phase leading to “miniaturized” hairs. However, unlike men with MPHL, women with FPHL never go on to develop baldness.

The two different times of onset for FPHL may signal different causes. Women with the early onset type of FPHL have a stronger family history of male family members with significant male pattern baldness, a condition that is known to be androgen (male hormone) related. Women with early FPHL are also more likely than those with late onset FPHL to have a history of hirsutism (hair growth in the beard and moustache areas), adult acne that is persistent, or irregular periods, all potential signs of either androgen excess or androgen hypersensitivity. Having said this, it is only the women with FPHL and these other signs of androgen excess that are likely to have elevated levels of androgens in their blood: only a very small percentage of women with FPHL and no hirsutism, acne or irregular periods (<15%) will have any elevations of their blood androgens. In those women with late onset FPHL, who are much less likely to have documentation of androgen excess features and in fact are experiencing a decrease in their blood androgen levels related to menopause, it is not clear what the cause of the hair loss is. This is an area that needs much more research.

Unlike men with male pattern baldness in which the diagnosis seems self-evident, women experiencing hair loss should be evaluated by a dermatologist to determine the cause. It is important that the distribution of the hair loss, presence or absence of increased shedding and condition of the underlying scalp be noted. This will help to eliminate the possible confusion with other types of hair loss including alopecia areata, telogen effluvium or a cicatricial (destructive) type of hair loss. Typically, blood work is also done at an evaluation including thyroid function tests, complete blood count and serum iron stores to screen for other conditions that may cause generalized hair loss or contribute to the FPHL. In the case of a woman with irregular menses and hirsutism, androgens (testosterone, DHEAS) and prolactin may be drawn. A scalp biopsy may be very important to perform to discriminate between these various hair loss conditions if the diagnosis is in question: it is important that a pathologist familiar with hair disorders interprets the biopsy.

Once the diagnosis of female pattern hair loss is established, and the patient assigned to classification as having androgen excess or not, then treatment can be discussed rationally. Most women with female pattern hair loss will benefit from topical minoxidil (Rogaine), an over the counter medication. Topical minoxidil comes in two strengths, 2% and 5%, with only the 2% currently approved for women with this condition but both used in practice to treat this condition. Minoxidil encourages hair to move from the resting to actively growing stage and to grow longer and more vigorously. Some women may show visible regrowth with topical minoxidil while others note primarily a stabilization of loss. Side effects of topical minoxidil are primarily limited to irritation in ~ 8% of patients and some "peach fuzz" growth on the sides of the face in approximately 5%: these are both readily reversible on stopping the drug.

Finasteride (Propecia) is a drug that inhibits the conversion of testosterone to dihydrotestosterone, the male hormone deemed most important in causing male pattern baldness. It has been shown to be highly effective in men with male pattern baldness and had long been assumed that Propecia would show similar efficacy in women. Since there can be genital abnormalities in male fetuses of mothers taking finasteride during pregnancy, finasteride has only been studied extensively in postmenopausal women with FPHL. Surprisingly, finasteride was no better than placebo in effecting hair regrowth in these postmenopausal women. Finasteride has been used to treat hirsutism and in this context, there have been reports of improvement in those women with concomitant FPHL. Also, finasteride has been reported to improve FPHL in even post menopausal women who had documented androgen excess. Large scale studies of in women with FPHL who have documented excess androgens, particularly those with early onset FPHL, are necessary to definitively decide the effectiveness of finasteride in this condition. No woman of child bearing potential should take finasteride if she is pregnant, considering pregnancy or not on and willing to take effective contraceptive measures before, during and immediately after taking finasteride. Finasteride is not currently indicated for women and the AHRS does not recommend its use in women.

Anti-androgens include spironolactone and flutamide in the US and also cyproterone acetate in Canada and Europe. These drugs are al oral medications that block the effect of androgens on tissue. They may be used in women to help treat hirsutism or FPHL associated with elevated androgens but, like finasteride, may not be used during pregnancy or in those women wanting to be pregnant or not willing to use effective contraception before.

The following are frequently asked questions on female pattern hair loss. The information provided is not meant to be a substitute for the information obtained at an evaluation and by discussion with a physician, but merely to encourage understanding of this condition. No questions regarding individual scenarios will be answered by the AHRS. No changes in treatment should be undertaken by a patient without discussion first with the patient's physician.

I've heard that Rogaine Extra Strength (5%) is not approved for women. Why is that?

5% Rogaine has been studied in multicenter trials of women with female pattern hair loss and has been found to be safe and superior to placebo. However, the trials did not show statistically superior efficacy to 2% topical minoxidil in all endpoints tested so it is currently not FDA approved for this indication. Women and children with alopecia areata have also used 5% Rogaine off label and again safety has been maintained.

I'm a 41 years old woman, healthy and never had a problem with my hair before. Now my hair is all over my bathroom floor and every time I comb it, lots of hair comes out. What could be causing this hair loss?

There is a gradual change in your blood hormones long before menopause (or its cousin adrenopause) raises its head. Whether this subtle decrease in estrogen/progesterone, which often lead to minor changes in the frequency, amount of flow or duration of menses, actually cause the hair loss needs to be further studied. This is certainly a common time of life for late onset female pattern hair loss to appear. You should see your primary care physician or dermatologist however, for an evaluation to get a definitive diagnosis and to rule out such medical problems as a thyroid disorder.

I was told by my beautician that Product X sold on the internet would help my hair. Is there anything to this?

Product X, and many other products sold as hair cosmetics and not drugs, may make loose claims to effectiveness. They have not been held to the same standards as drugs either in providing documentation of effectiveness nor standardization of manufacture. If they did make the claim to reverse hair loss or actually effect hair growth, they must go through the FDA's rigorous testing for drugs, a path many such companies prefer not to do. Most of these products do little harm, have little positive effect, and are costly.

I was told by my health food store clerk that certain vitamins can make hair grow better. I'm now taking a hair pill that contains biotin, zinc, gingko biloba and echinacea. Are these vitamins that you'd recommend for my hair?

Unless you are deficient in certain vitamins, taking a supplement is unlikely to change things. Zinc and/or biotin deficiency can cause hair loss but this usually is in childhood when a genetic problem in the absorption or use of these vitamins is first unmasked. There is no evidence that people can be deficient in ginko biloba or echinacea and because of similar unknown negative effects, these are probably best not taken.

We do not know enough about the relationship of human hair growth/loss in women to estrogens/progestins to warrant making treatment recommendations. Hormone replacement therapy is unlikely to reverse the hair loss and a decision on its use should be determined by other factors.

Will Propecia work on my female pattern hair loss?